Holland Park interviewed Bryony Gordon, Columnist at The Daily Telegraph, to find out how her education has influenced her career choice and success. 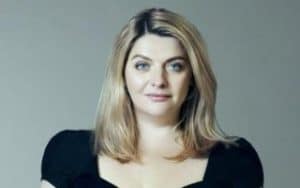 I remember being told to write an essay about the digestion of a cheese sandwich in Biology. I could think of nothing more boring, so I decided to write it from the point of view of the cheese sandwich. I got a commendation and I knew then: writing is what I want to do!

I’d like to hope so. I am aware, though, that a private education gave me immense privilege – and I was constantly reminded of that by my parents, who scrimped and saved to send me to Queen’s Gate.

My headmistress, Mrs Holyoake, was a formidable woman who banned uniform on the grounds of not wanting to see a sea of girls in grey. She taught me to cherish the things that make us individual, rather than always wanting to go with the crowd.

The sense that pastoral care is as important to a child as academic rigour. I remember winning the Progress Cup. I loved that there were awards for people who tried hard but weren’t hugely academic.

Bryony is a journalist and writer. She has written two memoirs about her life in her twenties, both of which featured on the Sunday Times bestseller list, and she has written a weekly column in The Daily Telegraph since 2006.